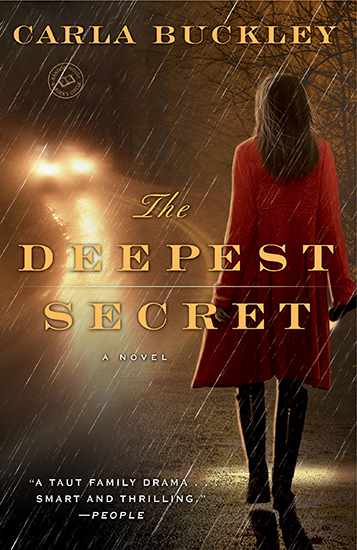 Signed copies may be ordered through McIntyre’s Books

Eve Lattimore’s family is like every other on their suburban street, with one exception. Her son Tyler has a rare medical condition that makes him fatally sensitive to light, which means heavy curtains and deadlocked doors protect him during the day and he can never leave the house except at night. For Eve, only constant vigilance stands between an increasingly restless teenage son and the dangers of the outside world.

Until the night the unthinkable happens. When tragedy strikes, it becomes clear that this family is not the only one on the quiet cul-de-sac that is more complicated than it appears. And as Eve is forced to shield her family from harm, there are some crises she cannot control—and some secrets that not even love can conceal.

Signed copies may be ordered through McIntyre’s Books

“Smart and thrilling. A taut family drama about a mother blindly obsessed with protecting her teen son from the UV light that could kill him.”
—People

“Exceptionally moving and unrelentingly suspenseful.”
—Providence Sunday Journal
“…an intense and unforgettable read.”
—Mystery Scene Magazine
“…masterfully portrays an ordinary family trapped in a heart-wrenching crisis.”
—William Landay
“The Deepest Secret is a ferociously passionate book, and I am unabashedly obsessed with every human populating its pages.”
—Lyndsay Faye
“A mesmerizing page turner.”
—Melanie Benjamin
“The Deepest Secret is one of Buckley’s finest accomplishments! Fans of Jodi Picoult will enjoy this compelling blend of ripped-from-the-headlines suspense and close-to-your-heart characters.”
—Lisa Gardner
“…explores the complexity of ethical situations as two families face separate life-and-death crises in this well-crafted page turner, I literally could not put the book down.”
—The Roanoke Times

Sign up to receive occasional newsletters from Carla with all the latest news.

Note: this is a private list—your email address will not be shared, and you can unsubscribe at any time.